note: some combinations of values (e.g. extremes or negatives) may break the simulation and require a refresh in order for audio to resume

synth used is a fork of Neil Thapen's Pink Trombone

Is there any possibility to get an audio file exporter for this?  I can record it 'live' no problem, but it would be wonderful to get some sort of way to just export a .wav or .mp3!

hm unfortunately audio file exports aren't trivial in js; recording the loopback is much simpler, so if it's not too much hassle i'd recommend sticking with that method

You need to know JavaScript though

yes, i'm aware that this tool i wrote in js requires js lol. the audio here is being generated by an actively running vocal synth ported from a UI-only project, and hacked into an actively running game engine. it's not just generating a buffer for a full phrase and queuing it for playback after the fact. an audio export would require rewriting both of these such that you could deterministically generate the audio for the phrase as a single function call like that (which is possible, but like i said, not trivial).

it's all open source though so feel free to prove me wrong if you think i'm overestimating!

This is so cool!  There's some really interesting and surprising combinations in here.  Great work!

Fun story - I left this in an open tab and left my computer for a while. When I came back, it was stuck on 'I' and it was playing out of my headphones. I was hunting everywhere for a mosquito and found it a short while later, perplexed.

This is really cool! 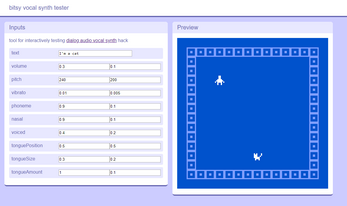